There are seven schools in the International Schools Group, three of which occupy one campus across the parking lot from the U.S. Consulate office. The three schools on the Dhahran campus are Dhahran British Grammar School (DBGS), Dhahran High School (DHS), and Dhahran Elementary-Middle School (DEMS). I teach at the latter, which is completely foreign to me. I have 13 years of prior teaching experience, 100 percent of that at the high school level.

I have gotten to know well one of the teachers at DBGS. It sounds like U.S. and British educations hold little in common, nor do the teaching positions. (BTW: Did you know the principal at British schools are called Head Teachers?) Beyond that, I don’t know enough to comment more, but I fully intend to use this experience as a research tool into the varying systems of education provided by those on the eastern and western edges of the Atlantic Ocean. Not only that, I aim to pick up some of the sweet lingo and terminology the Brits, although I’ll never call soccer by its worldly name: Football. Oh, who am I kidding, I’ll never talk about soccer anyway.

I captioned all the photographs. 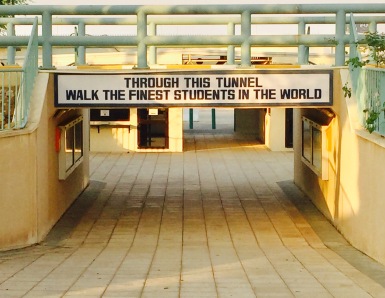 This is basically the last thing students see as they leave campus. Creating a culture of positivity, a place where people want to be, means paying attention to the little details like this. 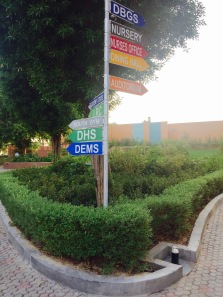 How can you not think of the famous sign from the M.A.S.H. TV show when you see this. Of course, if you’re under 35, you don’t even know what I’m talking about. Never mind. At this sign, I would’ve just walked up from the “Through this tunnel” tunnel, across a paved play area. And I veer left here, my room part of DEMS, which stands for Dhahran Elementary-Middle School.

This is the exterior of my classroom, with the water jug heavily used by students. My teaching space is what I have heard referred to as a “portable”. It’s like a large construction trailer, and is attached to two other portables. It is called G2. 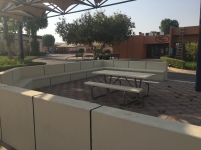 This is the court yard directly out the front steps of my classroom. You can see the media center across the way. Also, the picture shows just a portion of the sun blocker roof this area has over it to keep it shaded. Just this week students were finally allowed regular outdoor recess because the temperatures (barely) crawled under the triple-digit mark.

Student lockers are outdoors. I’ve been here nearly 40 days and 40 nights, and nary a drop of rain and barely any clouds.

This is my classroom. I teach 23 7th graders and 21 sixth graders (separately). In addition, the room has a well stocked classroom library and carpeted reading areas. International teaching gigs — or at least this one — has made me feel respected and supported as an educator.

The classroom library. Just found out I have 100 more books coming this week, which I’ve inherited from our middle school literacy center (a leveled book library).

Water jugs inhabit most classrooms. It saves on the constant “Can I go get a drink?” requests from students. 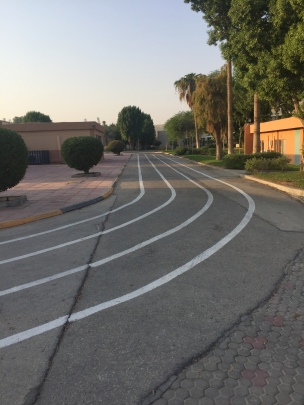 There is a walking path that meanders throughout campus. It has track lines painted on it, but I am assuming it’s not used for such purposes. I have seen people running on it, though. 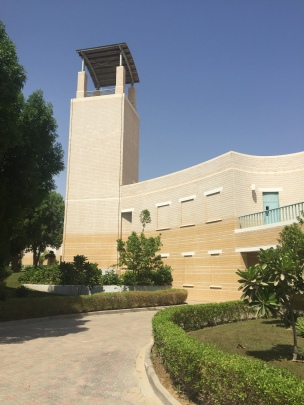 Not positive what building this tower is part of, but in the recruitment video it shows students repelling down the wall of the tower. Maybe it’s part of the admin building. I’ll eventually figure it out by doing some more exploring soon.

One place I’ve explored too regularly is the campus coffee shop a few feet from my classroom. Yum, those chilled brownies and lemon-mint drinks!

One thought on “The campus and my classroom”